Kinnikuman is a monumental Japanese manga that has been an explosive hit since the 1980s. The story of Kinnikuman, the main character, fighting various superhumans with a mix of humorous elements and realistic thrills of martial arts has created wild enthusiasm with many children. Miniature erasers shaped as characters, known as “Kin-Keshi” (“Kinnikuman Erasers”) also became all the rage. Even now, more than 40 years after its beginning, the serial publication continues, entertaining fans of the past while gaining new readers. The author, YUDETAMAGO, is the duo of the story writer Takashi Shimada, and the artist Yoshinori Nakai, who were classmates since elementary school. Mr. Nakai says:

"We used to rent a workspace together, but when I was drawing, I couldn’t concentrate with him walking around behind me working on the storyline (laugh). So we separated our workspaces and have weekly meetings. This gives us just the right amount of space." 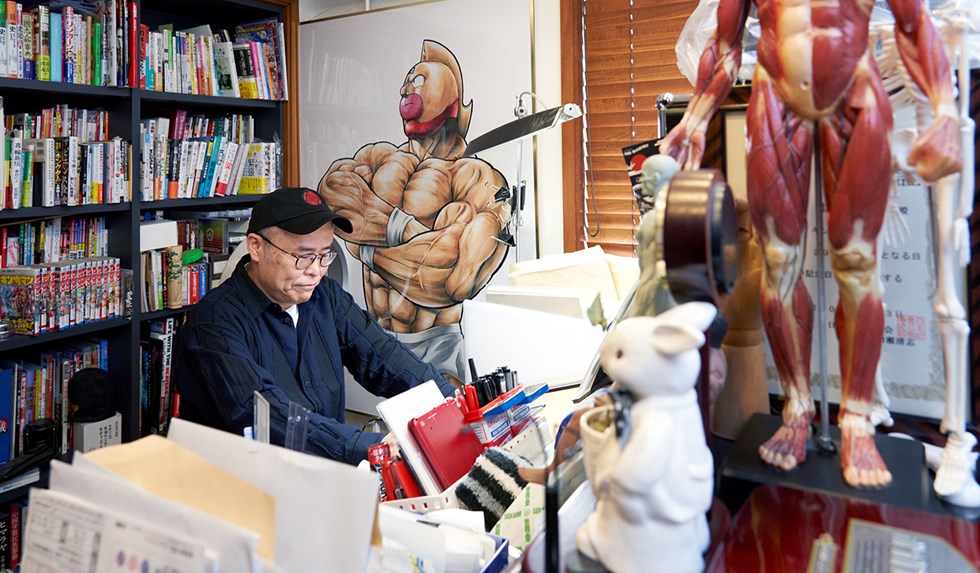 Mr. Nakai concentrates on his work every week from Friday through Tuesday. At the meeting, Mr. Shimada conveys the story, they check the movements and facial expressions in detail together, then Mr. Nakai, together with the 6 staff members, completes the story in 5 days. The finished piece will be published immediately in the magazine and on the Internet. Recently, some staff members have adopted working remotely from home, but most of the work in the office is analog. Due to that, Mr. Nakai has always tried to keep the working environment a comfortable space. "The image of old manga artists consisted of them at a kotatsu (foot warming heated table) or an orange box as a worktable and always wearing the same padded kimono. Also, the assistant was an apprentice of the manga artist who naturally worked all night. But mangas now are created together with staff members as a team. Since establishing my own company STUDIO EGG, I pay more attention to the work environment."

In the meeting space of STUDIO EGG, Kinnikuman character figures are packed and displayed in the USM Haller. They vary in size, but all of them perfectly express each character's individuality. There are also valuable pieces made of Kutani ware. The generation who was engrossed in the “Kin-Keshi” (“Kinnikuman Erasers”) is now in their 40s. Kinnikuman has become a culture of its own and continues expanding abundantly. "The number of these figures started increasing about 10 years ago. Kinnikuman has had hundreds of superhuman characters, many of whom have been made into figures. I wanted to display them neatly, and that is when I found the USM Haller. When I moved to this workspace, the designer Mr. Tetsuyoshi Yokoyama of Timeless Living was remodeling the space and recommended it to me."

"I decided to install the USM Haller after going to the showroom to see the actual product and to see how it was actually used in an office setting. The width, height, and depth can be adjusted according to the installation location. The deciding factor was that these various arrangements could be made easily. I also like its high-grade feel. Always being able to see the past characters is also useful in completing new characters. " 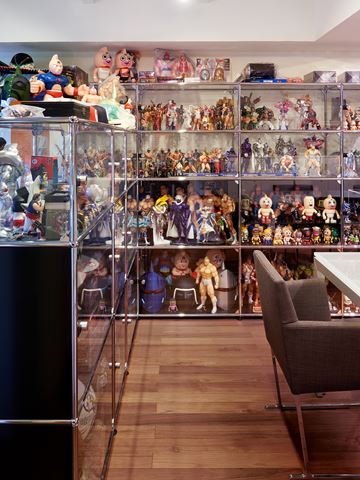 The L-shaped USM Haller stores Mr. Nakai's collection, including the massive number of figures, and also serves as a room partition. Some of the panels are made of glass on both sides to allow sunlight from the windows to reach into the room. Since moving here about 10 years ago, the USM Haller has been expanded twice with the addition of parts as the collection grows.

The USM Haller is also active in the room where Mr. Nakai and the staff are at their desks. After using it in the conference space, his appreciation for this furniture was renewed and pieces were gradually added. Also, Mr. Nakai has a USM Haller at home as storage furniture that doubles as a TV stand. Composed of a thin frame and metal or glass panels, the USM Haller makes efficient use of space. In addition, the metal panels come in 14 color variations making it possible to choose a color that is fitting to the room atmosphere. "Normal office cabinets are oppressive, but USM Haller matches colors to white walls and doesn’t stand out too much. I also use white at home. I like that it's simple and has a lot of storage space.” Dick’s clothing store in Edinburgh boasts a collection of menswear, womenswear, accessories and homewares with an emphasis on quality and longevity. See how they used three USM Haller units to best present Dick’s gorgeous products.