This exciting project is about to take you on a trip to the far south of Australia, more precisely Hobart in Tasmania.

We had the pleasure to meet with Lauren Bamford, at the origin of Slow Beam, a very stylish contemporary house and unique Hobart getaway. Two linked pavilions making use of the previous owner’s abandoned earthworks have been built, creating two unique views within the house; the rear faces a meadow sloping steeply into cut rock, while the front enjoys the stunning views of the Derwent River.

The interiors celebrate Australia creativity, featuring a large selection of Australian makes, designers and artists as well as USM furniture. My name is Lauren Bamford, and I am a photographer based in Melbourne, Australia.

This house is a very personal expression from myself and my husband. We purchased a bushy steep block of land, and now have this beautiful and intimately detailed home away from home. The journey was challenging but fun. It was designed by our friend Sarah Trotter of Hearth Studio, and built in 2018. Keith, my husband, is from Hobart. His family are all still located there, which meant we would be visiting a lot. We started discussing the possibility of buying an apartment in Hobart as our first and only investment, as Melbourne was out of reach for us financially. We were confident that we could buy a place for us to stay in when we visit, but could have on Airbnb the rest of the time. We have never lived in it ourselves, but take the opportunity to get down there as often as we can - it is our 3 year old daughters favourite place in the world. 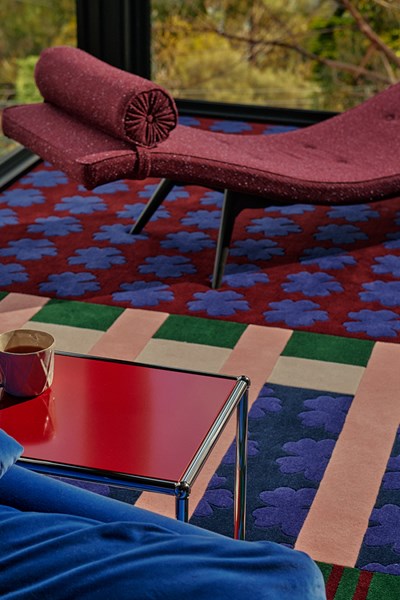 I knew from the start that I wanted something dark and moody. I really loved what March Studio did with the concrete beams in the lobby of the former Hotel Hotel in Canberra. And that general aesthetic of a dark textured base, dressed with a confident colour palette. Then adding art and mid-century furniture to give it character. However I didn’t want it to look like I was playing vintage dress ups either, so made sure it retained modern elements. First and foremost, I just chose things I loved. The fact that most of the art pieces are from people I know, is just a product of the city I live in, my interests, the work I do, and the people I have gotten to know over the years. Being surrounded by so much inspiring art and design meant I didn’t even need to think about looking further afield for it. The thought that went into which particular pieces were chosen and where they were placed in the house, was very deliberate. In some cases, such as the Fred Ganim Black notes coat rack, I had seen this a little while before we started building, and just had to have it – so made sure I kept a place vacant for it to live. I’m a very decisive person, lots of the pieces for the house were chosen on first sight.

My main home in Melbourne does feature some strong colours too, but with a neutral base - so it doesn't have quite the same impact. 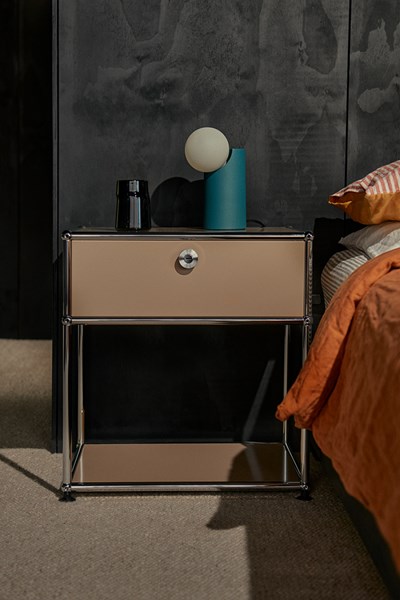 We intentionally wanted the building to be defined by the location and land itself. The site had many qualities that lead us down the path of trying to lean into a sense of uniqueness wherever the opportunity presented itself. Of course, the slightly wild and steep terrain was quite unique, but also being located in the intersection of inner city life and native bush is something that can’t be experienced in many places anymore. That combined with the fact that we knew this would be a place to visit and retreat to meant there was a greater freedom to make design choices that would create that sense of something out of the ordinary. 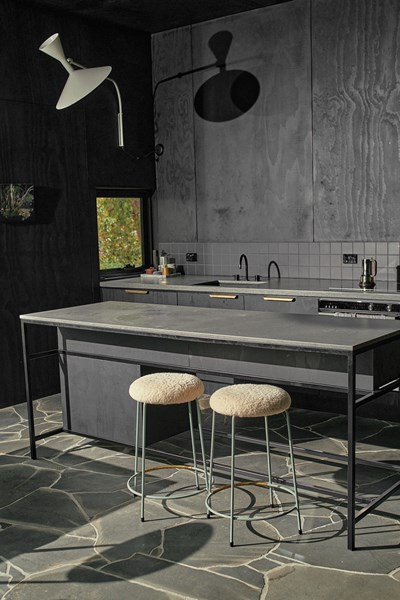 It seemed to be a risk that concerned everyone else except us. Many comments were made by our builder along the way, trying to discourage the black walls and ceilings - however I had confidence that it would work with the large windows. It also allows all the furnishings we chose to really stand out, and in fact, helps focus your eyes on the views outside. We don't regret it at all.

I have always had an affection for mid century style - clean lines and bold colours. However, comfort and function are paramount. Chic, but casual. USM brings something modern and utilitarian to the house. The pieces are bold and stylish, and fit in seamlessly with the rest of the furniture. We desperately needed more functional storage around the house, and the USM furniture provides that, but are also desirable design pieces. We love them all, and feel they have brought some new life to the house.

We warmly thank Lauren for sharing her story with us and highly recommend you to experience a stay at her beautiful place: https://www.slowbeam.com/house Naoki Terada is the President, COO of Inter Office Co. Ltd., specializing in high-end furniture from around the world. Mr. Terada is also an architect and designer, who created the “Terada House”, a modern masterpiece full of furniture that creates an optimistic atmosphere. Amélie-Margot Chevalier has textile fibre written in her DNA. Together with her sister, this specialist in antique, modern and contemporary tapestries is the fourth generation to run the famous Galerie Chevalier Parsua. Having worked in the fashion industry his entire career, Craig Ford is a man with an acute sense of design.