‘We’re always looking for elegant solutions to complex problems,’ says industrial designer Edward Goodwin. ‘We like it when we get constraints from our clients. Constraints catalyse creativity.’ Goodwin and his partner Richard Hartshorn, founded their eponymous company Goodwin Hartshorn in 2002 after training together for their Masters on the Industrial Design course at London’s Royal College of Art. Previously the pair had both come from backgrounds in engineering after studying at Cambridge and Oxford respectively, which has fed directly into their work for companies such as Ideal Standard, audio manufacturer Bowers & Wilkins, and medical products company Frankenman International. ‘There’s always an underpinning of us looking at the functionality of something,’ says Hartshorn. ‘And also interrogating the teams that we’re working with. A lot of our relationships are with companies that have in-house engineering teams and we understand things from their point of view, as well as challenging them on different aspects of the design.’ The pair initially set up their studio in Dalston, then an up-and-coming area in the east of the city. However, as it gentrified rents shot up and they decided to look at other places, including nearby Bethnal Green, before alighting on their current space in Deptford, south of the Thames. The double-aspect studio, adjacent to the award-winning Trinity Laban Conservatoire of Music & Dance designed by Swiss architects Herzog & de Meuron, was shell and core when they first found it and as Hartshorn explains: ‘Because it was so much cheaper than we’d previously been paying, we could afford to do it up nicely.’ The pair initially became aware of USM when a colleague purchased some pieces in their shared Dalston space. ‘There’s something about that which appeals to the engineers in us’ says Goodwin. The pair have specified two long, low-slung, storage cabinets (in yellow) as well as a set of white shelves which they’ve festooned with pot plants. ‘There’s a unified aesthetic to it,’ continues Goodwin, ‘even though the pieces we have in the studio are very different objects.’  They also like the open space between the main draws and the tops of the storage units, using them to lay out material samples and create mini-displays – something that goes down well with clients apparently. 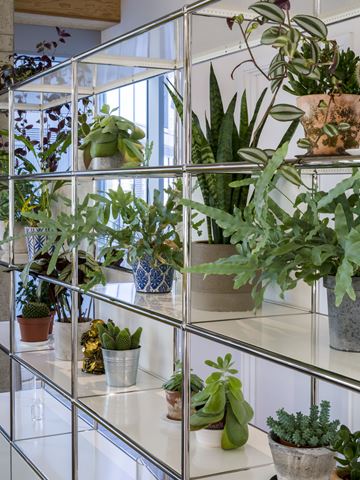 ‘You can’t really argue with it. I don’t think it’s going to go out of fashion’ concludes Goodwin. And coming from a company with their pedigree that’s high praise indeed.